Hey, Obama! Nice "Change" right? I guess The Patriot Act doesn't look so bad now that you are sitting in that Presidential chair! 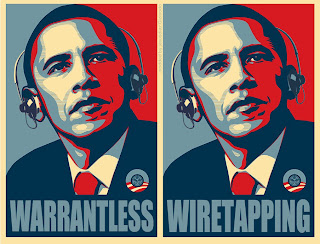 B"H
Wait!  Weren't the Democrats the leading anti-tapping group when George Bush was in office?  Didn't they oppose the Patriot Act in all its forms?
Remember this?

"I'm stunned by the president's rationale," said Sen. Jack Reed of Rhode Island. He said Bush's justification for the eavesdropping was "without merit."

Wisconsin Democratic Sen. Russ Feingold said Bush's comments represent a "retreat from who we are and who we should be" as a nation.Democratic House leaders are calling for an independent panel to investigate the legality of the program.

I guess the shoe is on the other foot now?  The "Change" president has decided that Bush was right, and not only was he right, but he didn't go far enough??


Very interesting.
It seems that one thing has happened in Washington since the Democrats took over--they have learned a few things about terrorism.
So, is this good for the rest of us?  I admit, it is a slippery slope.  The government wants to protect the country from terrorism, and the people want to have the right to express themselves without being prosecuted for doing so.
Right now, with a just government (mostly) in power, we can assume that such powers won't be abused--but it IS Washington politicians that we are talking about, and they may define damage to their political ambitions as a "terrorist act."
And how many of us just assume that we are being listened to most of the time anyways?  Seriously, if I were a bad guy, I would never communicate anything unless it was person to person--and then I would make sure it was in a room with loud music playing and I had checked all those present for wires, spy pens, cellular phones, microphones, etc.
Thank goodness my conversations are mostly about how angry I got in traffic, or my latest recipe for banana bread! (although that last one could be considered "top secret" in some circles!).
So, will this new wave of wiretapping make us safer?  Maybe, maybe not--but I would guarantee it would make it a lot harder for the bad guys to coordinate and cooperate.
M
------

WASHINGTON — Federal law enforcement and national security officials are  preparing to seek sweeping new regulations for the Internet, arguing that their ability to wiretap criminal and terrorism suspects is “going dark” as people increasingly communicate online instead of by telephone.

Essentially, officials want Congress to require all services that enable  communications — including encrypted e-mail transmitters like BlackBerry, social networking Web sites like Facebook — to be technically capable of complying if served with a wiretap order. The mandate would include being able to intercept and unscramble encrypted messages.

The bill, which the Obama administration plans to submit to lawmakers next year, raises fresh questions about how to balance security needs with protecting privacy and fostering innovation. And because security services around the world face the same problem, it could set an example  that is copied globally.

James X. Dempsey
Posted by Unknown at 6:40 AM