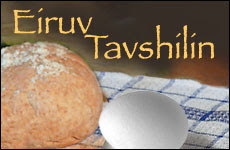 The Proper Procedures for ERUV TAVSHILIN
By Rabbi Eli Monsour

Because the holiday is falling out on a Thursday and Friday, and we’re going straight into Shabbat, Halacha does tell us that it is forbidden to cook from Yom Tov for Shabbat. Even though Friday is Yom Tov and we are allowed to cook according to the Halachot of Yom Tov, but one would not be allowed to prepare the food on Friday for the Friday night Shabbat, unless one prepared Eruv Tavshilin.

Wednesday, before the holiday, Halacha says; you take something baked (like Challah) and something cooked (like hard boiled egg or meat), and you make the Beracha, “Asher Kidishanu Bemitzvotav Vitsivanu Al Mitzvat Eruv”, and then you declare: “With this Eruv that I am making, it would be permissible for me to cook, and to bake, and to carry, and to do all my needs for Yom Tov to Shabbat.”

So Eruv Tavshilin is vital in order to make those preparations. Now, it should be pointed out, Eruv Tavshilin, while it helps you for Friday to Shabbat, it does not help from one Yom Tov to the next. This means, if let’s say, someone is having a Seder by their home on Thursday night, which is the 2nd night of a Yom Tov, and they want to start preparing Thursday afternoon, cooking the rice, and preparing some of the foods, so that when the people come home Thursday night its all ready- It’s Forbidden.


We’re not allowed to prepare from one Yom Tov to another! We must wait until its dark outside, and then you can start cooking for the holiday. So this Eruv only allows you to start preparing food Thursday night or Friday for the Shabbat meal. Of course the cooking and the preparations have to be finished obviously before Shabbat.

Now, in the event one forgets to make the Eruv Tavshilin, Halacha tells us that the Rabbi of the City, of every city knowing that people forget or don’t know, he has in mind when he makes his Eruv to include all the dwellers in the city. So Bediavad, if you forgot to make Eruv Tavshilin, you’re still OK, as you can rely on the Rabbi’s Eruv. However, you cannot rely on the Rabbi’s Eruv Lachatchila. Which means you can’t say; ‘I’m not making an Eruv, and I’m too busy, and I’m relying on the Rabbi’s.’ That does not work. It only works in the case where you made a mistake, or you forgot or there were circumstances where you couldn’t do the Eruv.

Of course you place the Eruv in a safe place and Halacha says you have to be careful that you don’t eat it until after you finish your cooking on Friday for Shabbat. Halacha says, let’s say you ate or somebody ate it, then now your Eruv is invalid, so you have to rely on the Rabbi’s Eruv.

Halacha says when should you eat the Eruv? Preferably you eat it on Shabbat, and the custom is to eat at Seudat Shelishit. You take the Matzah and the egg in order to do another Mitzvah. The Gemarah says that since you’re doing one Mitzvah, you want to recycle it and do another Mitzvah. Again you should remind the ladies or the men, as its not specifically a lady’s item, that one should prepare the Eruv Tavshilin on Wednesday afternoon, and one should set it aside and fulfill this most important Mitzvah.

The above Halachot are all from the Shulchan Aruch.
Posted by Unknown at 5:47 PM