How Ashkenazi and Sephardi Traditions Differ on Rosh Hashana 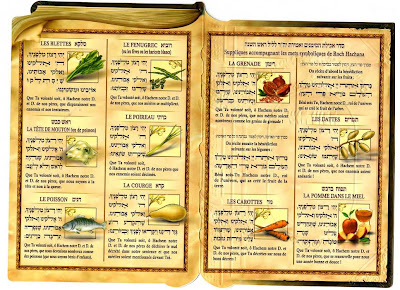 B"H
Rabbi Jonathan Sacks just said the most interesting quote I have heard in a while, "Science is about investigation, religion is about interpretation."
It is very true when it comes to our traditions.  As a proud Sephardi, I am commonly misunderstood.  Well meaning Ashkenazim, unaware that the traditions of both Ashkenazim and Sephardim are equally fortified by the rulings of great sages through the generations, often assume that Sephardim just don't know "THE LAW" (actually, your interpretation of the law, not THE law), or you assume that the Sephardim are just so irreligious that we don't care.
Not so, my penguin-clad brother from another mother!
Not even close, my dear sheitel-wearing sister from another mister!
Both groups of Jews both have legitimate traditions.  This clarifies some of the confusion--well, at least about Rosh Hashana  . . .
M
-----
Rules of Rosh Hashanah: Sephardic and Ashkenazic Traditions
http://www.midrash.org/halakha/roshana.html

The Aqedah of Yishaq Abinu is a very important theme on both Rosh Hashanah and Yom Kippur. G-d said to Abraham Abinu that the Shofar (ram's horn) should be blown on Rosh Hashanah. Through this, whenever His people would sin, the Shofar would remind him of the Aqedah and He would forgive them.

Abraham Abinu asked G-d what a "Shofar" was and on this it is written "...And Abraham lifted his eyes and behold a ram was caught in the thicket by his horns."

The Shofar is first blown on the first morning of Rosh Hashanah (unless it falls on Shabbath) and is preceded by the blessing of Sheheheyanu. There are some interesting differences between Ashkenazi and Sephardi practice in the sound, content and blowing of the Shofar. On the second day Sheheheyanu is not recited by Sepharadim who, in general, follow the teachings of Maran in the Shulhan 'Arukh.  Ashkenazim, who generally go according to the Rama, recite the blessing on both days.

Sepharadim blow during both the silent 'Amidah and the repetition and blow a total of one hundred and one calls (101 is the Gematria for Mikhael, Israel's guardian angel). The last one being a Teru'ah Gedolah after 'Aleinu Leshabbeyah. Ashkenazim blow only one hundred calls and the last one is a Teqi'ah Gedolah instead. In some Hassidic communities, the custom is to blow two hundred.

Women are, in theory, exempt from hearing the Shofar. However, most women nowadays are considered to have made a vow to hear it and, as such, if they are unable to hear it on Rosh Hashanah they must make an annulment of that vow prior to the onset of the holy day.

Rosh Hashanah is one of the holiest days in the year and a day of judgment for all mankind. In preparation, on the morning of 'Ereb Rosh Hashanah, one should cut ones hair (specifically before midday, as according to the Qabbalah hair should not be cut in the afternoon). Both men and women go to the Miqweh, (ritual-bath) and some fast. Hattarath Nedareem (the annulment of vows) is made.

It is customary to visit the cemeteries on the eve of the Holiday. In Jerusalem, a Hakham should be consulted concerning changes made to this custom.

Ashkenazi wear a Takhrikh (kittel in Yiddish - or death shroud) on Rosh Hashanah. Sephardim do not have this custom but both men and women should dress in white. The reason for this is that when the nations of the world are to be judged, they wear black. But the Jewish nation – coming in judgment before its Creator – wears white as a sign of faith and confidence that the Heavenly Father, in his abundant mercy, will bless us with a good and favorable judgment. However, one should not wear new clothes on the first day, as this might lead to arrogance at a time when one is pleading for mercy.

During the 'Arbith prayer, it is a good custom – and common in several Sepharadi communities – for the 'Amidah to be read aloud.

Extreme care should be taken to avoid anger on Rosh Hashanah. To assist in this, the lady of the house should ensure that the table is laid and everything preprared when her husband returns home from Synagogue. But if it is not, the husband must take care not to be bothered by it in any way.

Ashkenazim have the minhagh of dipping the Hammosi in honey on Rosh Hashanah, and this is the appropriate custom according to Ashkenazi tradition. According to Hakham Yoseph Hayyim, 'a"h, in the holy work BEN ISH HAI, the Hammosi must be dipped three times in sugar and three times in salt. Salt must be used because the table is likened to the altar and the Hammosi to the offering thereon. And on this it is written: "... With all thine offerings thou shalt offer salt". Another reason for the use of sugar instead of honey is that it is further written in connection with the offering of incense: "...You shall not offer leaven or honey..." and "...If honey were added it became ritually unfit".

For these reasons, Hakham Yoseph Hayyim,zy'a"a, writes, in his holy work BEN ISH HAI, that the apples that are eaten prior to the meal should be cooked in sugar and not honey. It follows logically, in such a case, the symbolic request (that our year should be sweet) that is recited with it, should not include the term "Kaddebash" ("like honey").

While some eat fish during Rosh Hashanah, according to Rab Hid"a and others, it is correct to abstain – because the Hebrew word for fish Dagh is likened to the word for worry Deagha. If it is not practical to place a Rosh Kebes on the table, a rooster head should be used instead. One who is particular about the above dictum would avoid a fish head.

On the first day, Tashlikh – the casting of ones sins into the water – is recited. When the first day of Rosh Hashanah fall on Shabbath, Some postpone Tashlikh to the second day. However, according to the ruling in Ben Ish Hai, Tashlikh must be made on the first day, even when it is on Shabbath. In such a case, however, since one may not carry outside an 'Erub, only the portion of "Mi E-l Kamokha" is recited by heart at the water, and the portions before and after are read in the Synagogue. Tashlikh is preceded by the reading of Tehilleem and Adra Zota. (Tehilleem are also read on the second day, followed by Adra Rabba).

The reading of Tehilleem and Adra Zota and Rabba usually takes place at people's homes, in groups of ten to fifteen. It is followed there by the the praying of Minha, except on Shabbath, when all pray at the Synagogue, in order to hear the Sefer Torah.

When the first day is on Shabbath, Ashkenazim postpone the recitation of Tashlikh to the second day. In the holy work BEN ISH HAI, however, it is written that Tashlikh is made on the first day, even when this is on Shabbath. In such a case, however, great care must be taken not to carry a prayer-book (or anything else) in a place where there is no 'Erub.

During the ten days from Rosh Hashanah to Yom Kippur one should be particularly careful about ones actions and speech, be repentant and increase the giving of charity.

Taken from the writings of Hakham Ya'aqob Menashe.
Posted by Unknown at 11:09 AM