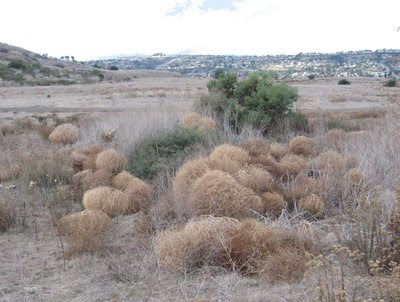 There is no better metaphor for these arab squatters on our Temple Mount than a Tumbleweed. I wrote about it a long time ago in one of my best columns for A7.

"First of all, tumbleweed, even though it has been present in every movie about the Old West for the last 50 years, is a non-native species. It's real name is "Russian Thistle," and it doesn't belong here. Tumbleweed is opportunistic and aggressive, and, once established, will crowd out the native species destroying both plant and animal habitat. It is especially prolific. Tumbleweeds can grow to giant size, topping five or six feet in height and sometimes as much as eight feet across. They grow in communities, protecting one another from the elements. When they are mature, they turn from a bright and vibrant green to woody beige, break off at the root, and go tumbling across acres of land, blown by the wind, dropping seeds everywhere.

These seeds are not innocuous little discs, they are thorny burrs with brittle, needle-sharp spines. These burrs grow by the thousands up and down every branch of the tumbleweed. There are very few things as terrible as stepping on a branch of tumbleweed with bare feet, as you can't see the tiny and exceedingly painful thorns. They break off and embed themselves in your skin, sometimes for days or weeks, before you can get them out.

Okay, so you have some context. Now you know why I can't just leave them alone. If left alone, they will just make more tumbleweed to destroy the land. They might look romantic, and they may operate in the minds of writers as a "symbol" for the free and open desert landscape, but they are really no more than a horrible thorn bush that crowds out the native species."

Here is an article about the crowding out of the native species--the reseeding of our Temple Mount a the non-native invasive and noxious species.

We must reclaim our Temple Mount, destroy the tumbleweed that is present there, and replant our Jewish roots where they belong.

Arabs profane our Holiest Site daily, praying with their backsides to the Holy of Holies.

M
-----
Muslim authorities say even right to talk to God on holy site exclusively theirs
http://www.wnd.com/index.php?fa=PAGE.view&pageId=71117

If Jerusalem's Temple Mount stands at the heart of the Middle East conflict, and if Muslim intransigence regarding the religious rights of others at the site is any indication, then it would appear all talk of regional peace is somewhat premature.

In an interview with Israel Today, Azzam Khatib, director of the Islamic Trust (or Waqf) that safeguards the mosques that sit atop the Temple Mount, said that Jews and Christians who try to pray at the ancient holy site are effectively declaring war.

Any non-Muslim "who seeks such an approach is really seeking a religious war," said Khatib, who insisted that the Temple Mount is an exclusively Muslim site and that Jews and Christians should not even want to pray there.

Khatib even took issue with the use of the term "Temple Mount," angrily demanding the site be called al-Haram al-Sharif, or Noble Sanctuary.

Khatib refused to consider the possibility that the site was once home to the First and Second Jewish Temples, calling such claims unsubstantiated myths. When presented with a citation from a 1929 tourist guide published by the Supreme Muslim Council that acknowledged the Temple Mount as the site of Solomon's Temple, Khatib rejected the idea that such a book was ever published by a Muslim authority.

According to Khatib, when the Muslims first arrived in Jerusalem 1,400 years ago, the Temple Mount area was barren, and no hard evidence of previous structures remained, making any non-Muslim claims to the hilltop mere speculation.

Always a fount of contradiction, the Muslim officials later negated their own claims that the Temple Mount was empty in A.D. 600 with their stories of Muhammad's midnight visit to the Al Aksa Mosque that today towers over the southern end of the raised compound.

Pointing to a massive retaining wall, which if the Muslim officials are to be believed should also not have existed 1,400 years ago, a Waqf guide identified the spot where Muhammad tied his horse, Buraq, after legend has it he traveled thousands of miles in the span of just a few hours.

Various Waqf officials also failed to provide a single, cohesive answer as to why the gate on the eastern side of the Temple Mount, known in the Bible as the Golden Gate, is sealed shut. Historical Muslim sources state that the gate was sealed and a cemetery planted in front of it to prevent Jesus' prophesied return.

But Khatib said the gate was closed simply because it was built in front of a cemetery and "it's difficult to approach a gate while passing through cemeteries, through graves."

When pressed as to why a gate would be built where a cemetery already existed, Khatib's aide and translator chimed in and altered the story, saying that the gate had been there first and "after the blocking of the gate, and people stop using the gate, people made use of the area (by burying their dead)."

A third explanation was provided by a Waqf official identified as Abu Qatis, who mumbled something about a Crusader massacre of Muslims at the gate.

Returning to the issue of protection of access to and religious freedom at the Temple Mount, Khatib and his aide vigorously denied suggestions that Jewish and Christian visitors are ever denied entry. Moments later, however, Khatib defended the practice of turning away visiting Jews and Christians as legitimate payback for Israeli security measures that deny access to the Temple Mount to Palestinian Arab Muslims from outside Jerusalem's municipal boundaries.

"You cannot expect us to allow in everyone when Palestinians from just outside Jerusalem cannot come here and pray," said Khatib.

An Israeli police officer standing guard at one of the Temple Mount's entrances told us that the restrictions on Muslim access are only enforced occasionally, and were only made necessary because of past Muslim riots at the site that ended with stones being hurled onto Jewish worshippers at the Western Wall.

"This is just an excuse," insisted Khatib. "Tell me, during the last five years in Jerusalem, what riots do we have in this area?"

Clearly unfamiliar with having their positions challenged, Khatib and his aide abruptly ended the interview when it was suggested that perhaps the lack of violence over the past five years was due to the Israeli measures.

With reporting by Michael Schneider and Nicole Jansezian.
Posted by Unknown at 5:10 PM