Stop the Destruction of Israel! 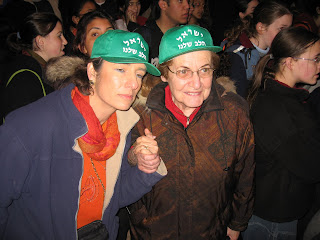 Below is an urgent action alert from Women in Green concerning the secret agreement being formed between the lame-duck US President and the all-but-cooked goose government of Ehud Olmert.

We need to stop this ridiculous "Peace" agreement which will destroy Israel.

EXPLANATION
Momentous negotiations between Israel and the Palestinians are taking place virtually unnoticed while we are preoccupied with United States elections.

A lame duck United States administration, very low in popularity polls, and an Israeli Prime Minister leaving office under a cloud of suspicion for corruption should not be making far-reaching Middle East policy decisions that will bind the next heads of State. Almost unnoticed by the media, the map of Israel is being dramatically altered.
The State Department with steady pressure from Secretary of State Condoleeza Rice is overseeing the demise of Israel. Twenty-two Arab countries are pushing for yet another Arab state to be carved out of the one and only tiny State of Israel. This is a recipe for Israeli self-destruction. Under the cover of U.S. presidential convention hoopla, Israel's future is quietly and surreptitiously being determined.

Please take a few minutes to send this important Urgent Action Alert to Prime Minister Olmert and the Knesset Members.

(IsraelNN.com) Negotiations between Israel and PA continue at a "crazy" pace, agreement on dividing Jerusalem is "closer than ever," and U.S. Secretary of State Condoleeza Rice is pushing for a nearly-complete agreement on a Palestinian state in Judea and Samaria by January. So reports Aaron Klein of WorldNetDaily (WND).
Secretary Rice, completing a visit to the region today (Tuesday), has been pressing Israel to sign a document by the end of the year that would divide Jerusalem. Rice says Israel must agree to a Palestinian state capital in Jerusalem - Israel`s own capital - and a full Palestinian state in Judea, Samaria and Gaza.

The Rice Compromise: Israel Remains in Jerusalem for 1-5 Years
Klein quotes top diplomatic sources involved in the talks as saying that Rice has been pushing for a "compromise" between Israel and the PA that would involve Israel`s withdrawal from eastern Jerusalem, including the Old City, within one to five years.

The Israeli team, led by Prime Minister Ehud Olmert and Foreign Minister Tzipi Livni, is willing to conclude an agreement on a Palestinian state by the end of the year, but wants to leave talks to decide the fate of Jerusalem for a later date. The PA team, however, wants a deal by January on all core issues, including the Holy City.

The Rice compromise, the sources told WND, asks Israeli leaders to bend and agree to promise sections of Jerusalem to the PA - but not to actually withdraw before one to five years have passed. U.S. President George W. Bush would then, just days before his term in office ends, issue an official letter guaranteeing U.S. support for the agreement.

High Intensity Talks
WND`s Klein quoted an unnamed Palestinian Authority negotiator saying that the intensity and frequency of Israeli-Palestinian talks in recent weeks have been "crazy," and that the sides have been meeting on a daily basis, usually at the highest levels. The negotiator further said Jerusalem is being discussed by both sides, and that the two teams are "closer than ever" on coming to an agreement on the status of the city. "This claim was verified to WND by other diplomatic sources involved in the negotiations," Klein wrote.

Reports of the past few months say that the Olmert-Livni negotiators are prepared to give up well over 90% of Judea and Samaria, as well as land for a "safe passage" between those areas and Gaza. This, despite the results of the withdrawal from Gaza three years ago, which include the takeover of the area by Hamas and incessant rocket attacks on nearby Israeli areas.

To Participate in the Action Alert, click on the link below to view the letter. You may use the letter as is or change anyway you like.