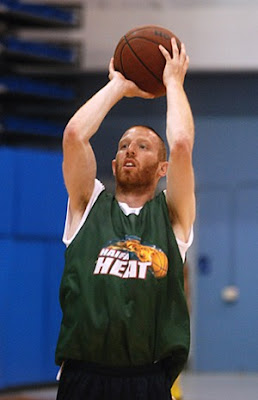 This young man is an inspiration. He won't compromise on his values, and he is talented beyond belief.

Thank G-d he is coming home. (Maybe he is a good Shidduch for our Observant Olympian! )

Tamir Goodman, the 26-year-old Orthodox Jewish basketball player who once seemed destined for stardom, is returning to Israel to play for the Maccabi Haifa Heat.

He signed during a two-day tryout at Nova Southeastern University in Florida. “I’m extremely excited about this opportunity,” Goodman told The Jewish Press, having spent his last season in the United States playing for the Premier Basketball League’s Maryland Nighthawks.

Goodman became a media sensation in 1999 when the University of Maryland took note of his 35.4 points per game at Baltimore’s Talmudical Academy and offered him a scholarship despite his commitment never to play on Shabbat. Sports Illustrated dubbed him the “Jewish Jordan.”

However, soon afterward his career took a downturn. The University of Maryland ultimately could not accommodate Goodman’s Shabbat needs, and he signed with Towson University. After two disappointing seasons, Goodman moved to Israel where he played for four different teams over five years, again underperforming. Several knee injuries also plagued him throughout.

Goodman, however, remains upbeat. “I feel like the most blessed person in the world. I’ve played in Division I basketball in the United States and in Israel without playing in Shabbos. I have two kids and coached 24,000 young people.”

The Haifa Heat, Goodman said, has signed other American players in addition to him and will broadcast their games in English over the Internet. “This is a team that American kids can cheer for and relate to,” he said. He sees himself and the Heat as “spreading Jewish pride,” and “using God-given physical talents for Hashem.”

Is there any chance that Goodman can still live up to the “Jewish Jordan” prediction? “I’m only 26; there’s a lot of basketball in front of me…. The only one I can try to please is Hashem and wherever He takes me that’s where I’m happiest.”
Posted by Unknown at 7:37 AM