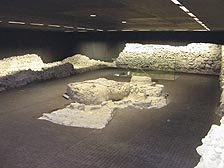 The sins of he Catholic Church have not been forgotten by generations of Jews, and they will probably never be forgiven. Reading about the forced conversions, expulsions, and burnings that took place still effect me on a very deep level.

I read about the small toy horse and rider, and I think about the last moments of a child's life, hiding in the community synagogue while it is burned down around him, screaming "Shema Ysrael!" at the top of his lungs to fight against the heat and the smoke.

I think of other children, carried away from their families, screaming, by priests and nuns and forced to submit to a foreign god. Stripped of their heritage, their hope, and their families, their lives were destroyed.

I think of mothers and fathers, wracked with pain, forced onto rudderless boats in chains and robbed of their greatest possession: their children.

This is a horror story, told in an underground bunker. I am not surprised that, on their way to remembering the Holocaust, Hashm has lead the people of Vienna to remember that it is only one of many.

It happened in 1421 in Vienna. It had happened in 1182 in Paris, in 1290 in England and in 1348 in Strasbourg, then part of Germany. The Jews were forcibly converted, killed or expelled and their synagogue destroyed. In some cases they returned within a few years, but in England and Vienna not for hundreds of years. In Vienna the poorer Jews who refused to convert to Christianity were deprived of their meager property and foodstuff and set on rudderless boats on the Danube which floated them into Hungary, where it seems they managed to survive. But Vienna did not see them again for 200 years.

Why was the Viennese community brought to a sudden end in 1421? On the one hand it was the usual complaint of the severe indebtedness of the aristocracy to the few rich Jewish moneylenders; on the other, the large number of impoverished Jews who were considered to be a drain on the city. But in the case of Vienna, all the Jews, as well as others, were under the jurisdiction and protection of Duke Albrecht V, so he could not lose face by expelling them, as he had been asked to do by the pope. A libel was then concocted, as elsewhere, that the Jews had desecrated the host, the symbol of the body of Christ, and so it became an ecclesiastical matter and outside the competence of the duke.

On May 23, 1420, at the behest of the Church, Duke Albrecht ordered the forcible conversion of the Jews. Those that had not converted or escaped or been sent off in the boats were burned at the stake on March 12, 1421, and their beautiful synagogue destroyed.

Centuries later, after the horrors of the Holocaust, the city of Vienna agreed to erect a memorial to the victims of the Nazi camps and in 1995 a design was selected for erection in the Judenplatz, the central area of medieval Jewry in Vienna. The chosen memorial was to be an empty stone-faced building with locked doors, designed by the British sculptress Rachel Whitehouse, to symbolize the locking out and destruction of Viennese Jewry by the Nazis. Luckily, before this rather anodyne memorial was erected, the city decided to send in its archeological team to dig down under the Judenplatz to see if there were any remains of its past. The result was sensational.

Less than three meters below ground level, the experts came across the stump walls and foundations of the medieval synagogue that had been destroyed in 1421. Its ground plan was clear and the archeologists could discern that it had stood over a period of 200 years, in three distinct phases. Nearby they went down even further and found that the whole area had been used to build wooden barracks in the second century for the Roman soldiers that had occupied the area, then called Vindobona.

To the credit of the city fathers, their experts were allowed to work for three years to make a meticulous record of the three phases of the synagogue and to preserve its remains within an underground annex to what was to become the Jewish Museum of medieval Vienna. What did this medieval synagogue look like? As usual with archeological digs, a certain amount of imagination is required, but here there were a large number of clues. The whole history of the terrible events of 1420/1 had been recorded in a Hebrew document called the Gezera of Vienna, which aimed to warn other cities of what the future might hold for them.

The Gezera is a contemporary document written in a heavily Jewish style, recording the great fortitude of the Jews that refused to convert and predicting the early defeat and demise of the duke. It is written with pride and authority and reflects the past importance of the community and its shul. This is confirmed by the archeological finds.

The earliest synagogue was a simple rectangular room and can be dated to around 1236, by the find of a coin, an Austrian penny of that date, on the surface of the plaster floor. The wall with the ark faced southeast, the direction of Jerusalem. There was a small entrance lobby to the north and a narrow women's annex to the south, with window-slits into the main chamber.

Some years later, when presumably the community had increased in number and wealth, the synagogue was largely rebuilt to double the size by increasing its length and setting two columns in the interior to change the simple room into a double vaulted nave with a central bima (reader's platform), rather like the famous Altneu Shul of Prague, which dates from 1270. It had a rectangular bima, while that of Vienna was clearly hexagonal, a unique feature. The hexagon was formed by slender Gothic columns and hung with oil lamps, remains of which were found in the debris alongside.

In the last phase of the synagogue, which dates to about 1350 or later, the double-barreled hall was again extended, the ark placed on a raised platform and pushed further east, and several side rooms added which were probably used for study and may even have housed a small yeshiva. The text of the Gezera suggests that one was active in Vienna in the later years of the community. This time the women's annex was also increased, which it had not been in the second phase.

Among finds in the debris of the destruction were a fine wooden comb (of the kind still used today to check for lice eggs), a large drinking beaker, the remains of a small toy horse and rider and a metal stylus, as used for writing on wax. The handle was in the shape of a young boy, and possibly these finds indicate the use of the rooms for a Hebrew school for youngsters. Another find was a medieval key, perhaps even the key used by the shamash (beadle) to lock up the synagogue.

Nine lead tokens, the size of large coins, were also found. They were embossed with formal designs, such as an eagle, a rosette and one with two kings holding a crown, and they are unique in Austria. Though not definitely of Jewish origin, it is tempting to see them as associated with the money-lending trade, and they may have counted as ersatz money for use among the Jewish merchants.

Today these remains are beautifully exhibited in the underground museum, which is regularly visited by non-Jewish schoolchildren to give them a flavor of early Jewish life in their capital.

After the destruction of 1421, it was not until 1624 that the Emperor Ferdinand II allowed the Jews to return and settle in Leopoldstadt, a suburb situated between two arms of the newly-regulated Danube, and by 1670 there were 137 dwellings there housing some 500 Jewish families.

But it was not until 200 years later, in 1825, that another synagogue was built in the main town, the first one to be erected there after the destroyed medieval one. It was designed by a non-Jewish architect, famous for his theaters, and built behind a residential façade, as required by the Catholic Church at that time. Thus it escaped the destruction of the November 1938 Kristallnacht pogrom that destroyed the 59 other Jewish prayer halls of Vienna. Nevertheless the interior was later ransacked by the Nazis, but has now been restored to its former theatrical glory.

The Stadttempel, as it is called, is the glory of modern-day Jewish Vienna, but even with its checkered life of 180 years, it cannot compare with the remains of the medieval synagogue of pre-1421, so beautifully displayed in the underground museum under the Judenplatz, which dates active Jewish life in the city back to some 800 years ago.

The writer is a fellow of the W.F. Albright Institute of Archeological Research in Jerusalem.
Posted by Unknown at 5:17 AM