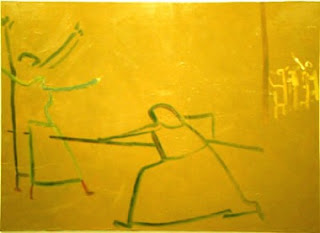 B"H
If I ask my child to swallow a bitter pill, and he sees results, he might do it again.
If I ask my child to swallow a bitter pill, and he sees no results, he will refuse the next time.
This is the lesson of this latest survey.  Our Youth will no longer swallow that bitter pill of "Land for Peace," or "Negotiation for Peace." They know it does nothing.
It is a lesson that the "dove" parties in Israel need to take to heart.  One does not promise peace at the expense of Jewish lives, one does not promise peace at the expense of Jewish homes, and one does not promise peace at the expense of Israel.  Too many times we have been asked to swallow the bitter pill with the promise that "this time we will have peace."
All of those promises have resulted in nothing but the bitter taste of losing what is dear to us.
It is time we took our lives into our own hands and stopped negotiating things which can never be negotiated.
Peace is something won in war, not agreed upon, not negotiated, not promised.  Our Torah teaches us that it is Pinchas, the zealous protector of Israel, who was awarded the Covenant of Peace from G-d.  In Pinchas, G-d teaches what we must do.
Putting off the inevitable is useless. If we allow evil in our midst, we die.  If we watch as our youth is lost to lust and greed and the corrupting influence of outsiders, we die.  It is only through moral strength that we can overcome this enemy, and through that moral strength, we must strike at the heart of evil.  One may scream about how Pinchas was wrong, one may lecture on the need for restraint, but, in the end, Pinchas and Pinchas alone is awarded peace.
How long must we stand at the door of the Tabernacle and watch the enemies of Israel bring immorality and evil into our camp to weaken us?
Our youth have already learned this lesson.  Now, it is time for those parties in Israel, who claim to be for "peace," to make the hard choices it takes to claim that prize.  We have swallowed enough of their bitter pills.  It is time they swallowed the Truth.
M
-----
Youth Becomes More Nationalist
http://www.israelnationalnews.com/News/News.aspx/143258
by Hillel Fendel
A survey carried out by a German foundation finds that Israel's youth has become more nationalist and does not expect peace.

The Friedrich Ebert Foundation of Germany, aided by the Macro Center for Political Economics in Tel Aviv, has published the results of its third annual Youth Study. The results partly explain why the strength of  left-wing and dovish parties such as Meretz and Labor has decreased in recent years and is likely to continue doing so.

The results are being publicized only now, though the survey was carried out last July. Some 1,200 Jewish youths and 400 Arab youths (not  from the Palestinian Authority-controlled areas, and not between the ages of 18 and 21) were polled.

Over 40% of the Jewish youth identify politically with the nationalist parties, with another 20% expressing solidarity with the "moderate" right-wing. Only 11.5% identify with the left-wing.

Among Arab youth, 35% said they "don't know" their political affiliation – approximately four times more than in the Jewish sector.

41% of the Arab youth said their most important goal was to build a happy family, and 3% said it was to contribute to society. Among Jews, it was 65.5% and 8.5%, respectively.

While close to 55% of Jewish youth feel neither positively nor negatively towards Arabs, over 11% feel fear, and 27% said they feel hatred. A total of 15% of Arabs feel either fear or hatred towards Jews.

Nearly three-quarters of Jews felt that security concerns must "always"  or "nearly always" take precedence over ideals of democracy if they clash.

Orders May be Refused - But Sometimes it Depends Which Ones
The Jewish youth were asked about soldiers' right to refuse orders. 21%  of those aged between 15 and 18 (19% among those aged 21-24) said it is  acceptable to refuse orders to destroy Jewish towns, but not orders regarding serving in Judea and Samaria; only 4% (2%) said that one may refuse to serve in Judea and Samaria, but not to evict settlers. 40% (31%) said it was OK to refuse in both cases, and 31% (42%) said it was not acceptable in either case.

Negotiations OK, But They Won't Accomplish Much
57% of Jewish youth favor negotiations with the PA, while nearly 40% object. Among Arabs, 51% favor and 46% object. 70% of Jews object to the  two-state solution.

Do the youth believe that negotiations will bring peace in the coming years?
Over 72% of Jews don't believe so, as do 52.5% of Arabs.
Posted by Unknown at 3:29 AM