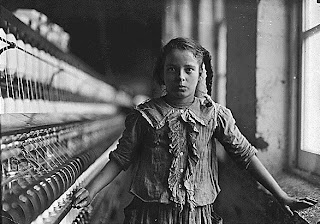 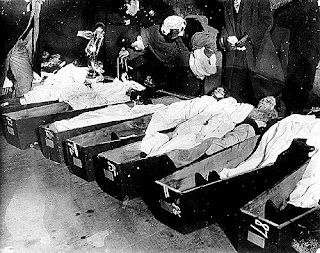 B"H
This was a huge tragedy that, G-d willing, will never be repeated.
The cities had grown in population, the buildings had grown in height, but the infrastructure had not changed.
Not only did the owners of the factory lock their doors, preventing the workers from escaping the flames, but the New York City fire department didn't have the equipment to rescue them--with ladders that only reached the sixth floor and  fire escapes in disrepair, crumbling and detaching when the women tried to access them.  One woman died trying to leap to a fireman's ladder.
The changes which came about because of this fire--safety and health regulations, labor laws, and rescue procedures--stand as the legacy of these young women who died so young.
May we never forget this tragedy, may we be ever vigilant.
If you work in a tall building, please take a few moments today to locate the fire extinguishers, escape routes, first aid boxes, portable heart defibrillators, and sprinkler systems.  Check fire doors to make sure they are in working order, that they are not blocked, and that no one has affixed a lock to them.
Know how to get out of your building in the dark.  Make sure your office participates in fire drills.  Ask you boss about getting people in your office trained in CPR and First Aid.  And, as you look around, think about the fact that 146 people, most of them young Jewish women, gave their lives so that you would have a chance to make it out of your building alive.
We must protect the vulnerable, the young, and the desperate.  They too easily become victims in the world.
M
-----
This Week in History: The Triangle Shirtwaist Fire
New  York City sweatshop disaster that killed 146 people, many of whom were Jewish immigrants, led to major changes in labor and safety laws.
By MICHAEL OMER-MAN
http://www.jpost.com/Features/InThespotlight/Article.aspx?id=213824
03/25/2011 12:26

A century ago today, one of the deadliest workplace disasters in American history took place at New York City’s Triangle Shirtwaist Factory, killing 146 young sweatshop workers, most of whom were Jewish immigrants. Tragically, rather than wait for rescue forces that would never reach them, many of those killed chose to jump to their death. The tragedy, one of the most symbolic events for modern labor movements, led to major changes in workplace labor and safety laws throughout the United States.

On several occasions prior to 1911, the young women of the Triangle Shirtwaist Factory attempted striking in order to demand better sanitary and safety conditions. On the evening of March 25, however, they were back at work on the eighth, ninth and tenth floors of the Brown Building in lower Manhattan’s Greenwich Village. On that Saturday, most of the doors to the factory were locked and when a fire broke out on the work floor, likely from a carelessly discarded cigarette butt, the girls had nowhere to escape.

William Sheppard, a United Press reporter who happened to be in the area, shockingly described the sound of bodies “thumping” on the pavement nine stories below the blaze. Firemen vainly attempted to catch the falling workers with nets but the young women crashed and broke right through to the concrete sidewalk and street below. Without ladders long enough to reach the trapped workers, firefighters watched the bodies literally pile up with the same horror and helplessness of bystanders who fainted at the site and sounds of the tragedy.

“Two girls were climbing onto the sill; they were fighting each other and crowding for air,” Sheppard wrote. “Behind them I saw many screaming heads. They fell almost together, but I heard two distinct thuds.” Describing firefighters’ failed attempts to save the young women, he transcribed from a public payphone: “The firemen raised the longest ladder. It reached only to the sixth floor. I saw the last girl jump at it and miss it. And then the faces disappeared from the window.”

Of the 146 people killed that day, 102 were Jews, most of whom were between the ages of 16 and 23. The local Jewish community reacted immediately with outrage and aid.

Jewish communities rushed to set up relief funds in the aftermath of the fire. Money was sent to dependents and survivors all over the globe, stretching from New York City to pre-Mandate Palestine. The Hebrew Free Burial Society lay to rest 22 of the fire’s victims in a Jewish cemetery in Staten Island.

The travesty was also used by labor unions to demand safer working conditions. The International Ladies Garment Workers Union (ILGWU) and its local chapters called for criminal accountability and improved workplace safety regulations. Just over one week after the fire, following a funeral for unidentified casualties, some 500,000 mourners and supporters took to the streets of New York in a silent demonstration over the tragedy. It remains one of the strongest symbols of the American plight for labor rights to this day.

The two owners of the Triangle Shirtwaist Factory, both Jews themselves, were charged with manslaughter for locking the factory floor doors. Although acquitted, the public outrage over the incredible death toll led to sweeping regulatory changes in New York and inspired other localities around the United States to follow suit. Safety and investigatory commissions were established and workplace conditions eventually improved over time.

In late February of 2011, on the 100th anniversary of the fire (25 of Adar in the Jewish calendar), a memorial service for the victims was held by the Hebrew Free Burial Society in Staten Island. Some 50 participants placed stones on each of the graves, including members of a group of men who took turns attending funerals at the cemetery to make sure there is a minyan in order to say Kaddish, according to The New York Times.

Also this year, on the centennial of the tragedy, the names of all 146 victims will be read for the first time. For 99 years, six of the fire’s victims remained unidentified but due to the obsessive dedication of a researcher named Michael Hirsch, all of those who perished will finally be remembered.

With vivid and horrifying accounts of teenage women jumping to their deaths published throughout the world and labor unions’ use of the calamity to demand better work conditions, the Triangle Shirtwaist Fire has remained a part of the American and Jewish conscious for a full century. Marking the centennial, HBO debuted a documentary commemorating the fire and its aftermath this week and a number of books and films have been released telling the story. One of American Jewry’s most tragic events – and the memory of its victims - continues to live on one century later.

JTA contributed to this report.
Posted by Unknown at 5:39 AM