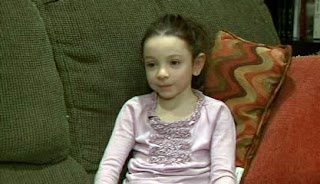 B"H
Shame on USA Gymnastics!  The New Jersey State tournament officials tried their best to accommodate the religious needs of Amalya Knapp when she could not compete on the Sabbath--but the USA Gymnastics organization chose to disqualify her scores because she didn't compete at the same time as the other girls!!


Please write to the national office of USA Gymnastics to complain about this horrible decision!


USA Gymnastics
132 E. Washington St., Suite 700
Indianapolis, IN 46204
Phone: 317-237-5050
Fax: 317-237-5069;
Member Services: 1-800-345-4719
e-mail:  cmaloney@usagym.org
If you have a Jewish Community Center that currently offers gymnastics and is an affiliate of the USA Gymnastics organization, please write, call, e-mail, and show up at the JCC board of directors meeting to suggest they drop any affiliation with USA Gymnastics (there are other governing organizations).
If your gym is an affiliate of USA Gymnastics, please let them know you are upset--and that you may be looking for a gym that is NOT USA Gymnastics affiliated because of this decision.  Please call or e-mail USA Gynastics, and tell your gym to call or write the national office.
I am so sorry that this girl had to choose between her faith and gymnastics--but I'm glad she made the right choice!
USA Gymnastics should have done the right thing too.  I am DISGUSTED with them right now.
Kol Kavod, Amalya!
M

Although she would have ranked fifth in her age group, eligible for a medal, her individual scores were discounted. She was unable to compete on a Saturday because of her Orthodox Jewish family's observance of the Sabbath.

"I was upset," Amalya said, "but my mother told me there are decisions you have to make."

USA Gymnastics made an effort to accommodate her and let her compete the next day, Sunday, Feb. 13, and permitted her scores to factor into her team's overall rankings.
But the national governing body held that because she hadn't competed at the same time as girls of her skill level and age group, her scores: 9.7 on vault, 9.575 floor, 9.5 beam and 8.75 bars — would not count toward individual medals or rankings.


The news disappointed the second-grader, a member of the US Gym team of the United States Gymnastics Development Center in Leonia, N.J. She had placed first in the all-around category in five previous competitions.

"She tried so hard, and practiced for months, and really put in her all, but just couldn't get that final award for her efforts," said Chavie Knapp, Amalya's mother. Knapp emphasized that her family appreciated USA Gymnastics' efforts to discuss the issue with them and try to reach a compromise.

"I wasn't bitter, and wasn't angry and worked with the organization and tried to work within the system," Knapp said.

Knapp said she and her husband encourage Amalya to engage in the sports and activities she loves, including ice skating lessons and playing for a Jewish youth soccer league that never practices or competes on Saturdays. Amalya said she wants one day to be an Olympic gymnast.

If she had to choose again between competing or observing the Sabbath, she said, "I would do the religion things."

She isn't the only young athlete faced with reconciling her passion for sports with religious obligation. Experts say the issue arises in all faiths, in nearly every sport, and at all levels of competition.

Last month, a standout Iowa high school wrestler, Joel Northrup, refused to compete against a girl at a state tournament, citing his Pentecostal religious beliefs against contact sports between men and women. His position caused him to relinquish any championship hopes.

One of the most memorable instances of an athlete embracing religion over team duty was the refusal of Hall of Fame pitcher Sandy Koufax of the Los Angeles Dodgers to pitch the opening game of the 1965 World Series. Koufax was observing Yom Kippur, a day of fasting and atonement considered the holiest date of the Jewish calendar.

It was Koufax's story that Amalya's parents chose to explain to her that the Sabbath — for which observant Jews abstain from working from sundown Friday until sundown Saturday — would always take precedence over the sport she loves.

"My father told me stories of people who had to do this, and I felt better," Amalya said.
Chavie Knapp said Amalya, who attends school at the Rosenbaum Yeshiva of North Jersey, was disappointed to miss her first state finals competition in a sport she had loved since she was a toddler. She practices up to 12 hours a week and dreams of competing in the Olympics one day.

"We had to try to help her understand how we really feel strongly that she can be a great gymnast and still be a committed Orthodox Jew," Knapp said. "We want her to be able to combine the love that she has for both of those things into an appreciation for both, and not a resentment of either."

A spokeswoman for USA Gymnastics, Leslie King, said the organization does its best to reasonably provide alternatives to athletes who face scheduling conflicts for religious or other reasons, when possible.

"USA Gymnastics is sensitive to these issues and will continue in its efforts to provide reasonable options to athletes under appropriate circumstances," King said in an e-mail message.

"I am sure you would agree about the critical importance in a child's life of both religious observance and athletic competition and that one should not come at the detriment of the other," he wrote.

Chavie Knapp said news coverage of her daughter's situation, first reported in The Record newspaper of Woodland Park, N.J., had put the family at the center of a heated debate over whether religious exemptions have a place in sports.

"This issue has really been pushing a lot of buttons for people," Knapp said. She's received an outpouring of mostly supportive comments, she said.

But there have been plenty of detractors.

"I had the other side, of people very angry, saying: why should I be accommodated when there's so many different religions and so many different issues that people have that come up, and why did I sign up for something knowing that I wouldn't be able to go to some of the events?" She said.

Rabbi Barry Dov Lerner of Wyncote, Pa., who competed for Arizona State University in the 1960s and held a national title in archery, is a Conservative Jew who observes the Sabbath.

College-level competition is rare for a Sabbath-observant Jew, Lerner said.

"In a nutshell, you can participate in sports, you can enjoy it, you can excel, but the way the world runs, you're not going to be in any competitions," he said. "You can't be in any sport that has competitions on the Sabbath, and not just games, but also workouts and practices on the Sabbath or holidays; that means you're not eligible for a football scholarship," Lerner said, adding with a laugh: "Well, go learn the oboe."

Lerner said he encourages young observant Jews to engage in sports for the training and self-discipline it teaches, but knowing that they may not reach competition levels. He teaches sports and other activities at Jewish summer camps, where children play games on Saturday, but scores aren't kept, to observe Sabbath rules against competing.

The rabbi said it's rare to find Orthodox Jews or strict Sabbath observers among top Jewish athletes, including Israel's professional and Olympic athletes.

Jeffrey S. Gurock, a professor at New York's Yeshiva University and author of the book Judaism's Encounter with American Sports, said Orthodox Jewish athletes or religiously observant athletes of other faiths can only reach a certain competitive level before running into conflicts.

"Can you be fully observant Jew and compete, and also observe the Sabbath? The answer is no," Gurock said. "America is making it easier, but in the end, if you're an Orthodox Jew, your religion will trump the sport, and if you want to be fully observant, you're only going to rise so far unless you can devote 365 days to your sport."

He said the sports world had increasingly recognized, and embraced, America's diversity and pluralism compared to decades past.

"It's still a difficult issue, and if you're going to be a top-flight athlete, you have to make a choice," Gurock said. "They're not going to postpone Wimbledon."

Other major sporting events have been postponed, however, for religious considerations, Gurock said. It's the reason major sporting events are rarely broadcast on Christmas Eve or that ESPN and Major League Baseball agreed, after complaints from die-hard Jewish baseball fans, to switch the starting time of a Yankees-Red Sox game on Sept. 27, 2009, so it wouldn't conflict with the beginning of Yom Kippur.

"Sports is the metaphor, but the real story is how do you live and integrate into American culture and maintain your own tradition," Gurock said. "It's a Jewish story, a Muslim story, a Mormon story."
Posted by Unknown at 5:57 PM