Tamir Goodman Keeps The Faith, Lives a Life of Integrity and Meaning 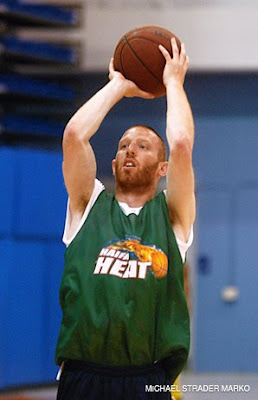 In a time when we see everything falling apart--the economy, the government, the institutions we have all depended upon, the community leaders we cared about, the Kosher Companies we counted on--it is nice to find someone who can be counted upon to do what is right.

Tamir Goodman makes no excuses, makes no exceptions, and makes no compromises in what is important in his life. He knows from WHOM his strength and his talents originate, and he remembers his obligations.

He is a man of integrity. He is a man we can all look to and see that there are people in the world who are good and fair and constant.

G-d bless this man, his family, and his incredible talent to inspire.

He has played professionally in Israel for about six years and hadn't been home to Baltimore until this past summer. That's when Tamir Goodman, the original "Jewish Jordan," discovered a room full of memorabilia that his mom has kept since her son became a media sensation almost 10 years ago.

Among other things was a collection of photos: Goodman posing in a jersey when he made varsity in seventh grade, Goodman hanging on a rim when he was even younger.

There were videos stored away, too: from the high school days, television analysts hyping him as a top 25 recruit, clips of his brief college career at Towson, and interviews Goodman gave in which he talked about the taunts he faced in gyms, including having pennies thrown at him.

And yes, he also found the four-page Sports Illustrated feature published when he was 16, during his junior year at Talmudical Academy. That story provided him the nickname that sticks with him wherever he goes, which this past Wednesday was Solomon Schechter Day School in Glen Cove.

"The name is with me in every country, with who I play with and against, but it's not about that. It's about doing good," the 6-3 guard said before speaking to students as part of a U.S. tour that benefits underprivileged children in Israel, where he plays for the Maccabi Haifa Heat of the Israeli Premier League. "It's never been about me. It's always about giving back."

Goodman, 26, first gained national attention as an exceptional shooter and passer who as a high school junior orally accepted the offer of a full scholarship from the University of Maryland. But Goodman, an Orthodox Jew who wears a yarmulke during games, refuses to play on the Jewish Sabbath. His inability to travel, practice and play from sundown Friday to sundown Saturday and the difficulty of rearranging schedules eventually became an issue, although Goodman had made his beliefs clear from the beginning.

After a contentious meeting with Maryland coach Gary Williams in September 1999, Goodman -- citing friction with the coaching staff over his refusal to play on the Sabbath and saying he no longer felt as wanted -- declined the scholarship offer he had accepted the previous January. There were strong indications that the coaching staff had second thoughts about having offered the scholarship and had doubts about whether Goodman was an Atlantic Coast Conference-caliber player.

Goodman landed at nearby Towson, he said, because the America East Conference was willing to adjust the team's schedule to accommodate his beliefs. As a freshman, he started and occasionally flashed the skills that had gotten him so much attention -- recording 15 points and 10 assists against Northeastern and averaging 26.8 minutes, 6.0 points and 4.1 assists -- but in his sophomore season, Goodman had a falling-out with a new coach, left the school and soon began playing pro ball in Israel with several teams.

He signed with Haifa (currently 6-2, tied for second in the league) this past summer, lives 30 minutes from the team facility and is married with two young children. His wife, Judy, a former high school track star from the Cleveland area, would not compete on the Sabbath, either. His daughter is 4 and named Oriyah, Hebrew for "God is my light." His younger son's name, Matanel, means "Present from God."

"I went through a lot," he said, "but looking back, everything was so perfect and made me ready for the situation I'm in now. I'm so blessed, and doing exactly what I want to be doing."
Posted by Unknown at 5:09 AM