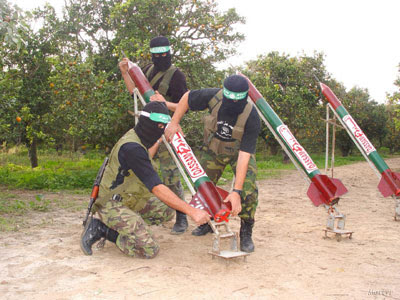 The same logic has been employed by alcoholics everywhere who insist that they are not drunks. The liquor companies, by their very existence, force them to drink.

However, I don’t think, that Egypt or Jordan would put up with this for one minute. Israel needs to squash these lice in the scalp of humanity once and for all.

With Kassam rockets raining down on cities in the western Negev, including Ashkelon, the Hamas military wing lashed out at Israel late Wednesday, saying that it was Israel, and not the Islamic group, which was responsible for the escalation.

"The increasing stupidity of Israel is forcing us to intensify the rocket fire, and put thousands more Zionists in the line of fire in order to protect the Palestinian people," a spokesperson for group's military wing said.

"The artillery unit of the Izzadin Kassam brigades is acting out of an obligation to protect our Palestinian brothers, and out of a desire to take a stand against the arrogance of the Zionist enemy," the group said in a statement which was distributed in the evening. "Since early morning, the unit launched intensive rocket fire of dozens of rockets and mortar shells at military outposts, bases, and the thieving communities of the Zionist enemy which surround the Gaza Strip from North to South."

Also on Wednesday, Damascus-based Hamas leader Khaled Mashaal accused Israel of not abiding by the truce and being the one to break the ceasefire.

According to the report, Mashaal said that Israel failed to open the crossings into the Gaza Strip and did not cease cross-border military attacks.

In an interview with Russian television, Mashaal criticized Egypt as well, and called on Cairo to open the Rafah crossing in order to break the blockade.

Earlier in the day, Palestinian Authority President Mahmoud Abbas called on both sides to cease hostilities and called the escalation "hard and regretful."

"Our people are facing attacks and a blockade," he said. "We are doing our utmost in order to achieve a full ceasefire and to calm the situation."
Posted by Unknown at 9:28 AM