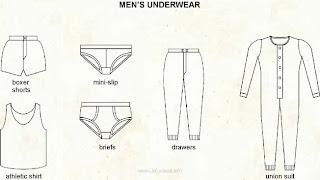 Wow. Talk about going through your underwear drawer to find evidence! LOL

I would suggest that this guy is very deeply in trouble--in less, of course:

There has to be SOME explanation.

Woman comes up with original way to prove to Rabbinical Court that her husband is cheating on her: She takes his underpants to lab in bid to produce DNA sample which belongs neither to him nor to herself

A woman in her 50s came up with an original and advanced way to prove to the Rabbinical Court that her husband is cheating on her and that she is entitled to a divorce: She obtained a DNA sample of the alleged mistress, produced from a pair of underpants belonging to her husband.

The lab's findings were handed over to the rabbinical judges for review.

The woman, who was completely certain of her claim, took the underpants to the lab shortly after her husband slipped them off upon his return home. She believed that should the lab find another woman's DNA traces on the underpants, she would be able to prove her claim.

A considerable sum of money is at stake in this divorce procedure, and obtaining such "evidence" could be highly significant.

The lab received the underwear along with a sample of the wife's saliva and two cigarettes smoked by her husband, in order to produce two DNA samples and rule out the possibility that the traces left on the underpants belong to couple.

The lab completed its work several days ago. The findings were clear and precise. On the underpants the lab found spermatozoon genetically matching the sample produced from the husband's cigarette butts, as well as a female's DNA traces which did not match those of the "betrayed wife".

The DNA lab is headed by Avner Rosengarten, a criminal forensics expert, who upon his retirement from the Israel Police decided to offer forensic testing to the public in a bid to help solve controversial issues.
Posted by Unknown at 8:25 AM