Some customs for the holiday of Hanoukah by Joseph Mosseri 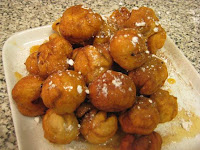