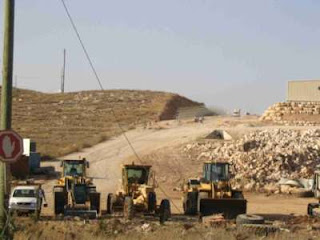 This article draws the same conclusions I have been drawing for the past few weeks. It is obvious that Olmert and Livni and the lame-duck Bush administration has already reached an agreement with the murdering terrorists under Abbas to give up our rights to Samaria and Judea.

Incitement against the people who have settled the land is clearly showing itself in a pattern--an "attack" on a left winger by supposed "Jewish Terrorists;" incitement by the arabs and left wing against Israeli communities in Judea and Samaria; a spotty police response which ignores arab and left-wing incitement and focuses, instead, upon small perceived threats by nationalist Jews; the arrest and harassment of Jewish leadership in the area designated by the government to be given away; a campaign by the left-wing media against the "settlers" in the area.

We saw all this in Gaza, didn't we? We saw the supposed "Jewish Terrorist" threat escalating, left wing politicians started to call for unequal treatment against Jews, and the government just swam along with the torrent of anti-Jew bias that culminated in the destruction of Gush Katif--to the detriment of Israel.

By the way, has anyone notice a complete lack of coverage about rockets in Sedrot lately? It seems as if everything is perfect in the north now, doesn't it? A strange calm has overtaken the nation. There is no arab terrorist threat now--it is all the scary nationalist Jews who are causing the problems, right?

The government had a problem with the nation was starting to realize that the promises of the government of peace in our time was a lie after the Gush Katif expulsion. Israel was united in support of the northern communities who had come under fire, we were disgusted by the continuing terrorist activities, we were horrified by the continuation of terrorist acts in Jerusalem. Now, suddenly, a strange calm? Now, suddenly, under Livni, the who world is at peace? The only problem, of course, are those pesky "Jewish terrorists" like Daniella????

Such a "peace" is very easy to engineer if you have Hamas and Abbas on your side--to what end? What has the government promised them??

And, of course, making sure that the Jews of Judea and Samaria are labled as evil is really easy. All you have to do is stage an "attack" by a "Jewish Terrorist" on some left-wing icon, then eliminate normal police protection of some of the more nationalist settlement blocks so that they are open to attack and must take security into their own hands, and then you just throw in a touch of "peace now" wackos torching people's fields and "harvesting olives" within feet of homes occupied by Jewish women and children.

JERUSALEM – A prominent leader of the West Bank's Jewish communities has accused Israel's security forces of orchestrating a recent attack on an extreme leftist Israeli professor and then using the attack to demonize West Bank Jews ahead of an expected evacuation of the territory.

The charge follows a WND article last week analyzing whether the Israeli government has been leading a campaign in recent weeks to de-legitimize Jewish settlers who live in the West Bank – territory slated to become part of a Palestinian state if current negotiations are pushed through. A similar campaign preceded Israel's 2005 retreat from the Gaza Strip.

Two weeks ago, a pipe bomb exploded outside the house of Israeli professor Zeev Sternhell, a prominent proponent of expelling Jews from the West Bank. Sternhell was lightly wounded.

With little information on who was behind the blast, media and politicians here immediately pointed to settler elements, even though the settler leadership widely condemned the act. Anti-settler themes dominated the news media here the last 12 days.

"A settler would never have done a thing like that," Weiss said. "It's in Shin Bet's best interest to create this provocation, in order to libel the settlers and thereby pave the way to settlement evacuation."

Reacting immediately to the attack, Prime Minister Ehud Olmert claimed there was a "direct link" between the attack on Sternhell and the assassination of former premier Yitzhak Rabin, whose death was blamed on a Jewish nationalist extremist in 1995 following the signing of the Oslo Accords, which offered the Palestinians strategic territory.

"An evil wind of extremism, of hatred, of malice, of violence, of lawlessness is blowing through certain sections of the Israeli public and threatens Israeli democracy," Olmert said at the Knesset, in a clear reference to West Bank settlers.

Spelling it out even more clearly, Defense Minister Ehud Barak urged the Knesset to adopt a tougher stance on punishing West Bank settlers for "unruly" behavior.

Addressing the Knesset today himself, Sternhell called on the government to rein in "extremist settlers," even though it is not even known yet who was behind the attack against him.

"The government does not grant the security forces the necessary backing" to rein in settler violence, Sternhell said, adding he does not wish to level criticism at the army or the police.

"The security forces cannot act if they don't have the government's and its leaders' political will and determination behind them," the professor said.

'Extremist settlers'
The attack on Sternhell was just one of scores of recent attacks blamed on settlers and used to blast the settlement establishment.

For the last few days, the media have been reporting on settlers accused of shooting to death an 18-year-old Palestinian shepherd. The reports were based on Palestinian claims but ignored settler investigations which showed it was extremely unlikely a Jew was involved in the death.

The accusation was used by both pundits and Israeli politicians to petition for harsher punishments against "extremist settlers." Finally, a police investigation last week determined the shepherd had not even been shot. Forensic experts found he was killed by shrapnel wounds after he picked up an unexploded shell that had detonated in his hands.

In recent days, settlers have been accused of attacks on Israel Defense Forces soldiers stationed near settlements. The attacks took place near two particular communities in which members of dubious, extremist fringe organizations reside, including the settlement of Yitzhar. The fringe groups inside Yitzhar are widely condemned by the vast majority of the West Bank's Jewish communities and are not representative of the settlement movement.

That hasn't stopped the media, including the international press, from using the Yitzhar attacks to typecast the settlement movement. A New York Times article this week, reporting from the fringe Yitzhar, is titled, "Radical Settlers Take on Israel," as if Yitzhar represents the rest of the settler movement. The Times interviewed some of the most radical settlers in Yitzhar who are not respected in the wider settler community.

The anti-settler campaign is reminiscent of the mood in Israel just prior to Israel's retreat from the Gaza Strip in 2005, when authorities blamed a series of extremist acts on the Jews of Gush Katif, the former Jewish communities of Gaza.

The Israeli media and politicians here complained then about "violent settlers," but it turned out many of the acts in question actually were carried out by extremist elements with dubious connections to fringe Jewish organizations from outside Gaza, unconnected to and unsupported by Gush Katif or the larger settler movement.

A case in point was the extremism of protesters inside the Palm Beach Hotel, a rundown former Jewish beachside resort on the shores of Gaza that had been utilized as a staging ground for a group of rowdy protesters who came to Gush Katif to oppose Israel's Gaza evacuation. The Jews inside the hotel staged several events provoking Israeli forces and even were involved with some run-ins with local Arabs, although it seemed the Arabs had started the confrontations.

The Jewish residents of Gaza, mostly peaceful farmers who put up passive resistance to Israel's evacuation, distanced themselves from the extremist hotel protesters. And yet the Israeli and international media did not distinguish Gaza's Jews from the outside provocateurs at the hotel, which was one of several examples of extremism blamed on the tree-lined communities of Gush Katif and used against them to argue for their expulsion.

In 2005, Israel also used violence from fringe extremists to arrest without direct cause and put in administrative detention scores of settlers and nationalist leaders the government claimed may incite violence. The leaders were released without charges after the Gaza expulsion.

History repeats
Now, amid intense Israeli-Palestinian negotiations in which Israel has made clear it will cede the vast majority of the West Bank, the same cycle seems to be repeating itself.

In an eerie flashback to the days of administrative detention just before Israel's Gaza retreat, the Israeli court system recently upheld a ban on several West Bank Jews from returning to their homes, for fear they will incite violence.

Also, the Knesset in recent weeks has been debating a bill to compensate West Bank Jews who voluntarily leave their homes ahead of an Israeli withdrawal from the territory. A similar offer was made to the Jews of Gaza in 2005.

Israel recaptured the West Bank in the 1967 Six Day War. The territory, in which about 200,000 Jews live, is tied to Judaism throughout the Torah.

The book of Genesis says Abraham entered Israel at Shechem (Nablus) and received God's promise of land for his offspring. He was later buried with the rest of the biblical patriarchs and matriarchs, except for Rachel, in Hebron's Tomb of the Patriarchs. Hebron was site of the first Jewish capital.

The nearby town of Beit El, anciently called Bethel meaning "house of God," is where Scripture says the patriarch Jacob slept on a stone pillow and dreamed of angels ascending and descending a stairway to heaven. In that dream, God spoke directly to Jacob and reaffirmed the promise of territory.

And in Exodus, the holy tabernacle rested in Shiloh, believed to be the first area the ancient Israelites settled after fleeing Egypt.
Posted by Unknown at 10:19 PM