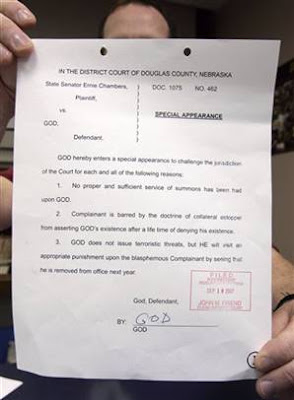 The legal loopholes really make it hard for some people to be apostates these days!

M
-----
Suit against God thrown out over lack of address
http://www.philly.com/philly/hp/news_update/20081015_ap_suitagainstgodthrownoutoverlackofaddress.html
NATE JENKINS
The Associated Press

LINCOLN, Neb. - A judge has thrown out a Nebraska legislator's lawsuit against God, saying the Almighty wasn't properly served due to his unlisted home address. State Sen. Ernie Chambers filed the lawsuit last year seeking a permanent injunction against God.

He said God has made terroristic threats against the senator and his constituents in Omaha, inspired fear and caused "widespread death, destruction and terrorization of millions upon millions of the Earth's inhabitants."

Chambers has said he filed the lawsuit to make the point that everyone should have access to the courts regardless of whether they are rich or poor.

On Tuesday, however, Douglas County District Court Judge Marlon Polk ruled that under state law a plaintiff must have access to the defendant for a lawsuit to move forward.

"Given that this court finds that there can never be service effectuated on the named defendant this action will be dismissed with prejudice," Polk wrote.

Chambers, who graduated from law school but never took the bar exam, thinks he's found a hole in the judge's ruling.

"The court itself acknowledges the existence of God," Chambers said Wednesday. "A consequence of that acknowledgment is a recognition of God's omniscience."

Therefore, Chambers said, "Since God knows everything, God has notice of this lawsuit."

Chambers has 30 days to decide whether to appeal. He said he hasn't decided yet.

Chambers, who has served a record 38 years in the Nebraska Legislature, is not returning next year because of term limits. He skips morning prayers during the legislative session and often criticizes Christians.
Posted by Unknown at 5:34 AM