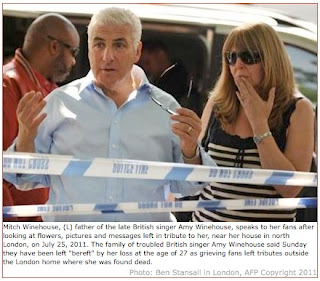 B"H
It is nice to know that this exceptionally talented and equally troubled soul will find a resting place among her people.
May Hashm comfort her family, friends, and fans.  May her music continue in the hearts of all who heard her.
May her death warn those among us who have contemplated the use of drugs, and may her memory serve to encourage people to develop better access to drug and alcohol treatment facilities for all of the youth of the world.
No parent of a 27-year-old should have to bury their child.
When one is faced with a child who has lost their way and needs help fast, too often the facilities are overcrowded, there are waiting lists, the care is sub-par, and only the most ill are admitted.
This must stop.  We must be able to offer help when help is needed.  We need to research these problems in more depth, and we need to find a solution to the plague of alcohol and drugs.
M
-----
Private Jewish funeral for Amy Winehouse to be held Tuesday
http://www.ejpress.org/article/52295
LONDON  (AFP-EJP)---The funeral of pop diva Amy Winehouse, found dead at her London home on Saturday, will take place Tuesday and will be limited to family and close friends, a spokesman for her family said Monday.

The singer’s parents have said they want to give their daughter a Jewish burial.

Mitch  Winehouse, who visited his daughter’s Camden home today with his ex-wife Janis, said he was touched by the support of fans who have kept a  vigil there.
Winehouse's  body was released to her family on Monday after a post-mortem failed to  establish a formal cause of death and, in accordance with Jewish tradition, the 27-year-old's remains must be laid to rest as soon as possible.

"The funeral will take place on Tuesday and will be a family and close friends affair," the spokesman said.

He  would not reveal details of the ceremony's location or time, but the Winehouse family home is in Southgate, north of London.

The  post-mortem was conducted at St Pancras Mortuary, with the formal inquest opened and adjourned to October 26 in a two-minute hearing at St  Pancras Coroner's Court.

Inquests in England establish the identity of the deceased, and the place, time and cause of death.
Police said the toxicology results were not expected for two to four weeks.