WIKILEAKS Says US is Behind Egyptian Overthrow. Be Careful What You Wish For!! 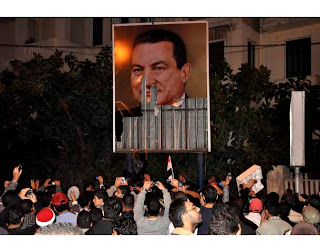 “A democracy is nothing more than mob rule, where fifty-one percent of the people may take away the rights of the other forty-nine.”

Supporting "democracy," is not necessarily a good thing.
Support for "democracy" in a country with no guarantee (or even the concept of) freedom of expression, freedom of the press, freedom of religion, or the protection of the rights of minorities is just plain stupid.
You can't just declare a "democracy."  There needs to be a structure in place, a constitution, a set of checks and balances, the education of the masses into what "freedom" means, and a leadership committed not just to the rights of the majority, but the rights and freedom of the minority as well.
Right now, I don't believe that Egypt can be considered a place where democracy can exist.  Perhaps democratic reforms can be made slowly and methodically, but "democracy" is an empty word in a place where freedom is as alien to the populace as moon rocks.
The United States does not have a "democratic" government.  We are a Constitutional Republic--a government balanced with a bicameral legislature, checks and balances between the different areas of government--executive, legislative, and judicial, and guaranteed freedoms of expression, the press, and religion.
Lots of tin-pot dictators, from Yassir Arafat to Castro to Ahmadinejad, all claim they are "democratically elected."  But this means nothing in a place where there is only one candidate, no freedom of expression, the press is government controlled, and there are no secret ballots.
Before we all jump on the "democracy for Egypt" bandwagon, let us be absolutely clear about what that democracy would represent.
M

The United States in the past last three years supported ‘democracy activists” who planned to overthrow the Mubarak regime, according to leaked cables quoted by the London Telegraph.

“[Unidentified activist] expressed satisfaction with the December 3-5 ‘Alliance of Youth Movements Summit’ in New York, noting that he was able to meet activists from other countries and outline his movement's goals for democratic change in Egypt,” stated one cable by U.S. Ambassador to Egypt Margaret Scobey. “He told us that the other activists at the summit were very supportive, and that some even offered  to hold public demonstrations in support of Egyptian democracy in their  countries.”

The embassy helped keep the identity of the dissident secret from Egyptian police, the Telegraph said, but he has been arrested in the recent demonstrations.

The leaked documents reveal that Scobey sent a cable to the Secretary of State two years ago, in which she wrote, “April 6 activist on his US visit and regime change in Egypt.” She added that embassy sources said the plan for “a transition to a parliamentary democracy [was] “so sensitive it cannot be written down.”

Scobey cautioned that she thought the plot was unrealistic, but contact  was maintained with the activist, who was a principle source for information for Egyptian abuse of human rights.

Reporters have frequently questioned the State Department about American aid to Egypt in light of constant reports, including those by the American government, that the country routinely suppresses human rights and violates freedom of expression.

The leaked document, along with President Obama’s tepid criticism of Egyptian President Hosni Mubarak Saturday night have set off more criticism of his foreign policies.

“The harsh reality of events in the Middle East have all decisively proven that the assumptions that underpinned President Obama's Middle East policy initiatives were wrong,” wrote Foreign Policy.com’s Peter Feaver Saturday.