Scientists Find Proof of First Modern Humans in (Wait for it ) . . . Israel! 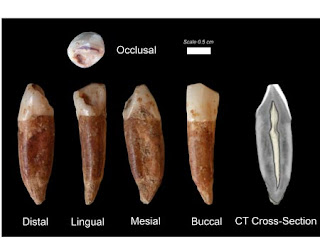 B"H
It always seems that scientists start out saying "HA!  The Torah isn't true!!" and, with a bit more research and time, end up saying . . . "Well, OK, maybe this ONE TIME . . . "  What is funny is how many "one time" discoveries have occurred!
This article is just another example.  Scientists may have found proof that humanity originated in (* gasp *) Israel!
Imagine that!  That silly old story of Adam and Eve might actually have happened.
Hmmmm.  You don't suppose all that other stuff is true too, do you?  You know, all the laws and such . . .
I wonder what type of conundrum this will put the strict evolutionists into. I can just imagine:
"No, Johnny, the Bible isn't true . . . well, except that part about how the universe was created suddenly, from nothing; how all matter was created the same moment; how all the planets were created at the same time as the rest of the universe; how light was separated from darkness because the universe was “foggy” with ionized plasma—a type of light that cannot be seen--and how, when the photons were released from that plasma, the universe become transparent as light was separated from darkness . . . well, and, of course there is this whole humanity originating in Israel thing . . . but, believe me, Johnny!  Even though there is no way the author of the Bible could have known this stuff unless the author was G-d, just remember, the Bible isn't true!!"
It seems the more scientific we get, the more we end up proving that Torah is truth--which, of course, is what Maimonides always believed.
But, back to my point.  It looks like we might have found the earliest modern humans, in Israel.
But, of course, for most of us, it was just a matter of time before the scientists caught up with what we already knew to be true.
M
-----
Archaeologists say they may have found earliest evidence yet for existence of modern man after discovering 4,000-year-old teeth in Qassem cave
Associated Press
http://www.ynetnews.com/articles/0,7340,L-4005729,00.html

Israeli  archaeologists said Monday they may have found the earliest evidence yet for the existence of modern man, and if so, it could upset theories of the origin of humans.

A Tel Aviv University team excavating a cave in central Israel said teeth found in the cave are about 400,000 years old and resemble those of other remains of modern man, known scientifically as Homo sapiens, found in Israel. The earliest Homo sapiens remains found until now are half as old.

"It's very exciting to come to this conclusion," said archaeologist Avi Gopher, whose team examined the teeth with X-rays and CT scans and dated them according to the layers of  earth where they were found.

He stressed that further research is needed to solidify the claim. If  it does, he says, "this changes the whole picture of evolution."

The accepted scientific theory is that Homo sapiens originated in Africa and migrated out of the continent. Gopher said if the remains are  definitively linked to modern human's ancestors, it could mean that modern man in fact originated in what is now Israel.

Sir Paul Mellars, a prehistory expert at Cambridge University, said the study is reputable, and the find is "important" because remains from  that critical time period are scarce, but it is premature to say the remains are human.

"Based on the evidence they've sited, it's a very tenuous and frankly  rather remote possibility," Mellars said. He said the remains are more likely related to modern man's ancient relatives, the Neanderthals.

According to today's accepted scientific theories, modern humans and Neanderthals stemmed from a common ancestor who lived in Africa about 700,000 years ago. One group of descendants migrated to Europe and developed into Neanderthals, later becoming extinct. Another group stayed in Africa and evolved into Homo sapiens — modern humans.

Teeth  are often unreliable indicators of origin, and analyses of skull remains would more definitively identify the species found in the Israeli cave, Mellars said.

Gopher, the Israeli archaeologist, said he is confident his team will find skulls and bones as they continue their dig.

The prehistoric Qesem cave was discovered in 2000, and excavations began in 2004. Researchers Gopher, Ran Barkai and Israel Hershkowitz published their study in the American Journal of Physical Anthropology.
Researchers: Ancient human remains found in Israel