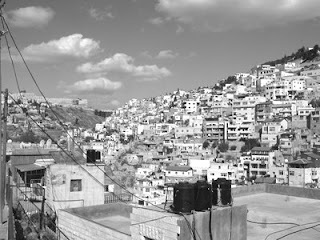 You didn't see this story before? I'm not surprised.

For your reading pleasure--here is the well-buried, well hidden article from Ha'aretz about our victory in the courts.

It is so ridiculous to have to prove that Israel belongs to Jews, but we are dealing with anti-religious Jews, socialist Europeans, revisionist-history arabs, and uneducated college students, so we do what we have to do in this world.

Kudos to the Committee of the Sephardi Jewry and the Committee of the Knesset of Israel for pressing for our rights to our own land. May the precedent of this victory bring the entire area around Simon's Tomb back to the original owners of the land, and may our aboriginal rights be upheld in every contest. We are the people of Israel, and those arabs who occupy our land should be immediately evicted. First, the courts upheld Jewish ownership in Hevron, now East Jerusalem. I'm hoping, all of Greater Israel is next.

After all, the deed to our land is in the drawers of every hotel in America, in the bookshelves of every xtian and Jew. We know who the real owners of Isael are, there is no doubt.

Take us to court. Set up a "protest tent" and throw rocks. We don't care. The land was, is, and always will be ours.

The High Court of Justice last week upheld a ruling for the eviction of a Palestinian family from the Sheikh Jarrah neighborhood of East Jerusalem, whose house is owned by religious Jews. The eviction spurred protest by senior Palestinian Authority officials, and diplomats from several consulates have already visited the house.

The Khurd family has lived in the contested building since 1956, when the area was under Jordanian control. After the area came under Israel's control in 1967, the Committee of the Sephardi Jewry and the Committee of the Knesset of Israel - two religious bodies - presented the Israeli authorities with various documents showing that they had purchased the area during the Ottoman rule.

The Palestinian families residing there were allowed to stay on as protected tenants, until they stopped paying rent. This prompted the owners to file for their eviction at the Jerusalem District Court, which ruled in favor of the plaintiffs from the Nachlat Shimon non-profit organization.

The family appealed to the High Court of Justice, but the justices upheld the district court's ruling. Following the ruling, Rafik Husseini, an aide to Palestinian President Mahmoud Abbas, last week contacted a number of consulates saying that the eviction creates a legal precedent, which will allow the eviction of 25 other Palestinian families who are in the same legal situation.

Since the 1990s, Nachlat Shimon, which represents land owners as they are listed in the records of Israeli authorities, has been making its presence felt in buildings surrounding the tomb of Simeon the Just (or Shimon HaTzaddik) a High Priest during the time of the Second Temple. If the family is evicted, Nachlat Shimon will take over the property.

In his letter, Rafik Husseini said hundreds of Palestinian families whose legal heirs now reside in East Jerusalem own between them no less than 60 percent of the area of the western part of the capital. He went on to say that Israeli courts never ruled that any of them should receive any of their houses. Husseini called the move a drive aimed at changing the demographic and geographic conditions in the city's eastern part by replacing Palestinians with "Israeli settlers."

Following Husseini's letter, diplomats from the U.S. consulate in Jerusalem visited the house, along with several other diplomats. Additionally activists from organizations such as Rabbis for Human Rights have set up protest vigils near the house, with the intention of physically preventing the eviction.
Posted by Unknown at 6:56 AM