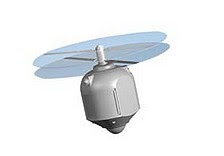 Wow! Cool. Very very cool. This sounds like something out of Buck Rodgers or Star Trek.

A small helicopter that can take off underwater from a submarine and hold two passengers - designed jointly by students at the Technion-Israel Institute of Technology in Haifa and the University of Pennsylvania - has won first prize in a US helicopter design competition.

Called "Waterspout," the helicopter can be stored inside the submarine without taking up too much space. It is released through existing openings in the submarine, so no new ones have to be made.

The helicopter is autonomous, can function in a variety of weather conditions and can be dispatched from a submarine from some 15 meters under the water's surface (enough for a periscope to see into the air from under the water.)

It can also float on the water in a rough sea, has the ability to fly 260 kilometers in one trip, and can hold two passengers (even if they are injured and have to lie on stretchers.)

The Waterspout also features stealth technology, including low-heat emissions and a coating that prevents it from being picked up by radar.

The Pennsylvania team, which was responsible for the aerodynamics of the rotors, the fuel system - which is not vulnerable to crashes - and various calculations, included Paul Branson, Meehir Misri, Alex Razano and Daniel Leonard, who worked under the supervision of Prof. Edward Smith, head of the Center of Excellence in Rotary Aircraft, and Dr. Robert Beale.

The model won first prize in the first-degree student category in a helicopter planning competition organized by the American Helicopter Society, as well as a prize in the "Best New Competitor" classification.
Posted by Unknown at 6:35 PM